I Couldn’t Believe the Campus Admin Was Doing This! Jesse Morrell Newsletter

This newsletter has no copy-right.

Feel free to share it by forwarding it on or by printing it off.

The University of Pennsylvania was a NEW campus for me! It’s a private ivy league school but us campus preachers happen to know that the major walk way through campus is actually a PUBLIC STREET! It looks like just a paved walkway but its a city owned street that the campus was build around.

The Univ. of Penn is actually the fourth oldest college in the United States I believe and actually has some connection to a building that was created for the preaching of George Whitefield, a traveling open-air preaching in the 1700’s. One of the things I love about preaching in my home area of New England is the rich spiritual history that is as. It is sad to see how spiritually dead and post-Christian and anti-Christian the New England area has become.

We were preaching next to the “Benjamin Franklin” statue. Benjamin Franklin once went to hear George Whitefield open air preaching. Now his statue was hearing ours! Franklin’s gone now but the gospel carries on!

It didn’t take too long before a nice crowd gathered around us. This happened with the help of a homosexual heckler. He was loud and obnoxious enough to help us get the attention of those walking by.

My strategy for open-air preaching, or my recipe for drawing a crowd is very simple. Controversy – Conflict – Content. Using more biblical terminology, the steps would be Convict – Contend – Content. That is, I start with a controversial topic like homosexual to get their attention and interaction. It won’t be too long until I get a heckler. Then I content with him (conflict) until a nice crowd stops to watch. It’s like when the Police pull someone over, or there is a car accident, other people slow down to see what happened. Nothing draws a crowd more than an open-air preaching contending with a heckler. Then I move on to phase three – content. Once the use of a heckler has helped me capture the attention of an audience, I deliver them the actual content I want them to hear. I warn them about sin and God’s judgment, tell them about the death, burial, and resurrection of Jesus Christ, and call them to repentance and faith to be born again.

If I start losing the attention of the crowd, I start back at phase one again and continue this cycle throughout the day. This helps me to draw and maintain a crowd for hours and hours. The longest I have preached was seven and a half hours and I had a captive audience almost the entire time. It’s simple: Controversy – Conflict – Content – Repeat.  While some open-air preachers hardly ever draw a crowd, with this strategy I hardly ever fail to get one.

Whenever you sow the seeds of the gospel, the devil comes to sow tares. On this campus, the administrators came against us by sending out their landscaping crew with leaf blowers to drown us out! There were no leaves in sight, except the few that they would blow out of the bushes that you couldn’t even see before. But that didn’t matter. They weren’t there to clean up the campus. The campus was already clean. They were there to oppose us and try to shut us down. They literally followed us around wherever we moved!

Since the administrators were trying to shut us down with the loud noise of the blowers, we took our bullhorn out. Free speech includes the right to be loud enough to be heard. Then an administrator came up to me and tried to tell me bullhorns were not legally aloud and I had to put mine away. It wasn’t any louder than their blowers. But I refused and told him that I would need to hear that from a Police Officer. We had about 10 Police Officers standing around anyways. The administrator never did get an Officer to tell me that the bullhorn was not allowed, so we kept using it as long as they had their blowers out. 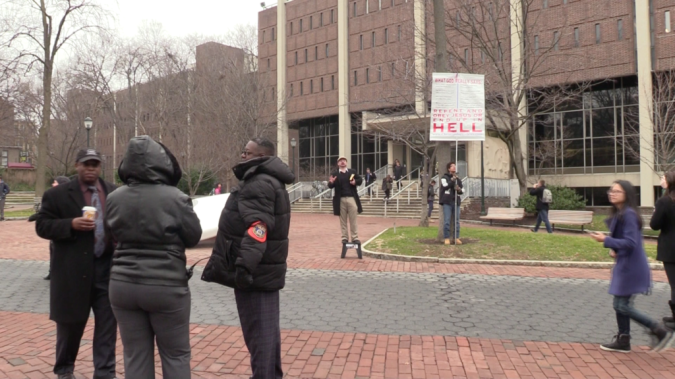 Every time we moved to a new location to get away from the leaf blowers, they would be right behind us. Everywhere we went, they followed. Even when we walked three or four blocks away, they followed us there too! They would circle around us and pretend to be blowing leaves, like the deceptive devils that they were. But it was really the liberal administrators of the Univ. of Penn. being intolerant, closed-minded, anti-Christian bigots! Just calling it like it is.

We started our preaching near the Benjamin Franklin statue where we were not disturbing any classrooms. But since they tried to drown us out there, and followed us wherever we went, we decided to set up shop right next to their business school – where President Donald Trump graduated from. That proved to be a sore spot for them on campus. It was also next to some students dormitories who were upset at all the noise. The students even set up a sound system to blast music to try to drown out the leaf blowers. So we had leaf blowers, a bullhorn, and a sound system all going at the same time disrupting the classrooms! All because they wouldn’t let us preach in peace and quiet near the Benjamin Franklin statue.

This did give is negotiation leverage and power. I told the administrators that they were only hurting themselves and are making bad executive decisions. If they would simply let us preach near the Benjamin Franklin statue, where we are not bothering any classrooms, we would put the bullhorn away and just preach on our soap box to whoever wants to stop and listen.

After a couple hours of battling the administrators, they finally agreed to put their noise makers away and we got back to preaching at our original location! Victory! Praise God! And thank you also to my Facebook friends who prayed about this as it was going on! This gospel shall be preached!

How our Ministry is having an Impact!

Someone just said on my latest Open Air Outreach video, “Thanks for the new upload brother Jesse. I am a young teen and I have been watching your videos for a while and you have inspired me to start reading the Bible and studying it and God. Soon I will preach out in public and it’s thanks to you. God bless :)”

“YES, same with me Brother Jesse. I’m 18 and watching your videos have really encouraged me to preach to my friends and classmates. I’m emboldened because I know the arguments that they’ll present due to your college preaching. You’ve really been a blessing to me. God bless you and please don’t stop what you do”

“Thank you for everything you’re are doing Jesse Morrell. Because of you, my brother started his own YouTube Channel and has already preached openly and handed out Tracks. If it wasn’t for you he would not be out in the world sharing the truth about Christ.”

THE MORRELL FAMILY
MISSIONARIES TO AMERICA

The Morrell Family is a missionary family to the United States, preaching the gospel in the open air to hundreds of thousands each year. We live by faith as God provides from the body of Christ through personal gifts. Will you consider being a monthly supporter or giving a one-time gift? Every little bit helps!

Special thanks in advance to our supporters. THE BATTLE IS ON! We couldn’t do it without you!